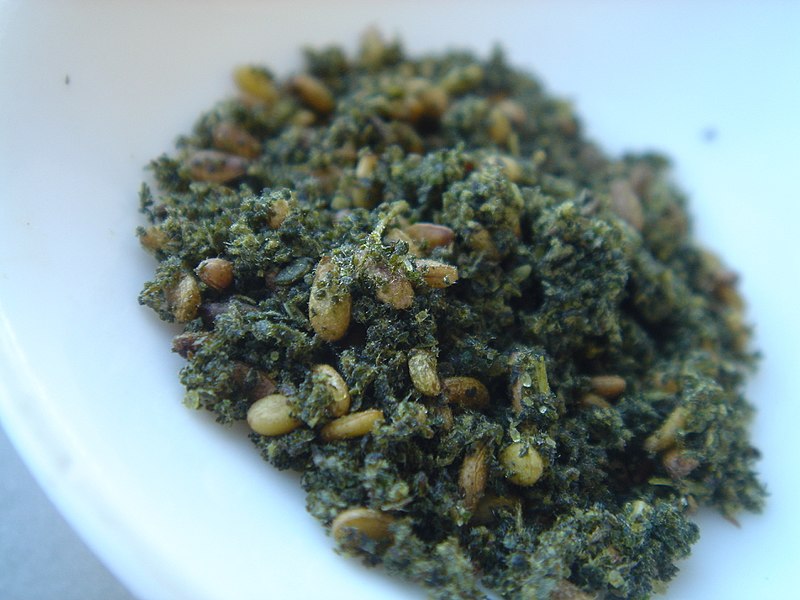 Armies come and go, rulers and regimes rise and fall, occupations end and others begin, but, like the sun that nourishes it, za’atar is eternal: a piece of bread, olive oil, and a dip.

For those who do not know the delights of za’atar, the world is an impoverished place, bereft of za’atar’s taste, texture, and, most of all, its fragrance that can drive the most sane person delirious, mad with intoxication. Call it an herb, and you don’t do justice to it; call it by its English-language names—hyssop, savory, oregano, thyme—and you turn it into some silly little thing that grows in manicured gardens. For za’atar is all of these things, but more, much more; its beauty is wild, its allure unassuming, its memories vivid.

For the non-za’atarites of the world, let me say with a dull voice that za’atar is the generic name for an herb whose ancestry goes all the way back to Biblical times and includes most of the herbs mentioned above, in different variations according to where it grows and is mixed. It is often mixed with sesame seeds or sumac or both. But, really, the method of preparation is not important because, for all intents and purposes, you cannot make za’atar yourself unless you live in parts of the world where za’atar grows under the generous, searing sun of the Middle East, often in semi-arid conditions. Even then, za’atar is a child of the hills where it grows and the streets and alleys where it is sold. It is the mother of all vernacular foods. Several years ago, on a visit to Palestine, I was in al-Khalil (Hebron), in the old market (the souk). We were walking in the narrow alleyway; the entire place it seemed enveloped in the pungent, distinctive fragrance of the divine herb. Then, my eyes caught a few sacks right there on the cobblestones as we turned a corner. The za’atar had no sumac, very little sesame seeds. It was pure za’atar—verdant, slightly oily, and very pungent. That’s the best za’atar I had ever tasted.

In such places as al-Khalil, za’atar is the native stuff of everyday life, growing on hills, in abundance, requiring only the sun and little water. But Za’atar cuts across national boundaries in the Middle East; class divisions; forms of social conduct.  It is the original and enduring fruit of the good earth—generous, beautiful, tasty, and inexpensive. Everyone—poor and rich, young and old—eats za’atar which is sold in high-end stores catering to the foodies as well as grimy little shops for the rest of the population. For all these qualities, za’atar is one of the most loved of all food staples there. And because it is so simple, it resists any sort of commercial messing around with, as has happened to yogurt, for instance, on its non-native shores. Nowadays, you can turn yogurt into ice cream made from a powder. Not so with za’atar, for za’atar is autonomous, with a distinctly native attitude. 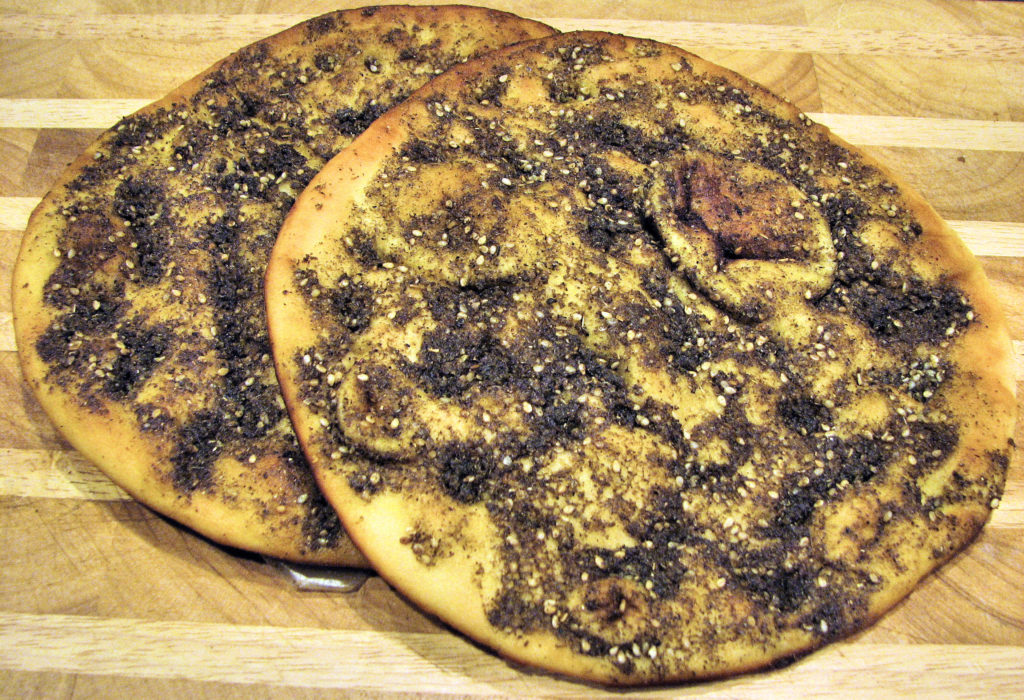 For those who have grown up in the Middle East region, za’atar is the food of their childhood and adolescence. In fact, one of the most pleasant memories of my years as a young girl has to do with za’atar.  We lived in Amman, the capital of Jordan. I would rush home after school, scamper to the kitchen, and make myself and my brother a za’atar sandwich in flat Arabic bread, with the divine herb and olive oil, topped with ripe tomatoes sliced. We would consume this snack (the word does no justice to the sensory overdose of the thing!) in a state of near-euphoria, with the za’atar-olive oil mixture dripping down our chins, the sandwich malleable in our hungry hands.  Then, at dinner, we would have za’atar again, no problem, this time with labneh (strained yogurt) and vegetables and tea.

Since those days, I have made it my life’s mission to seek the very best za’atar in the world. I have wavered between its various versions—the Syrian, the Lebanese (which the Lebanese think is the best!), the Jordanian, and the Palestinian, and concluded that the Jordanian and Palestinian za’atars are by far the better ones. I cannot choose between these two varieties because like the two countries and their populations, Jordanian and Palestinian za’atar are really part of the same weave. 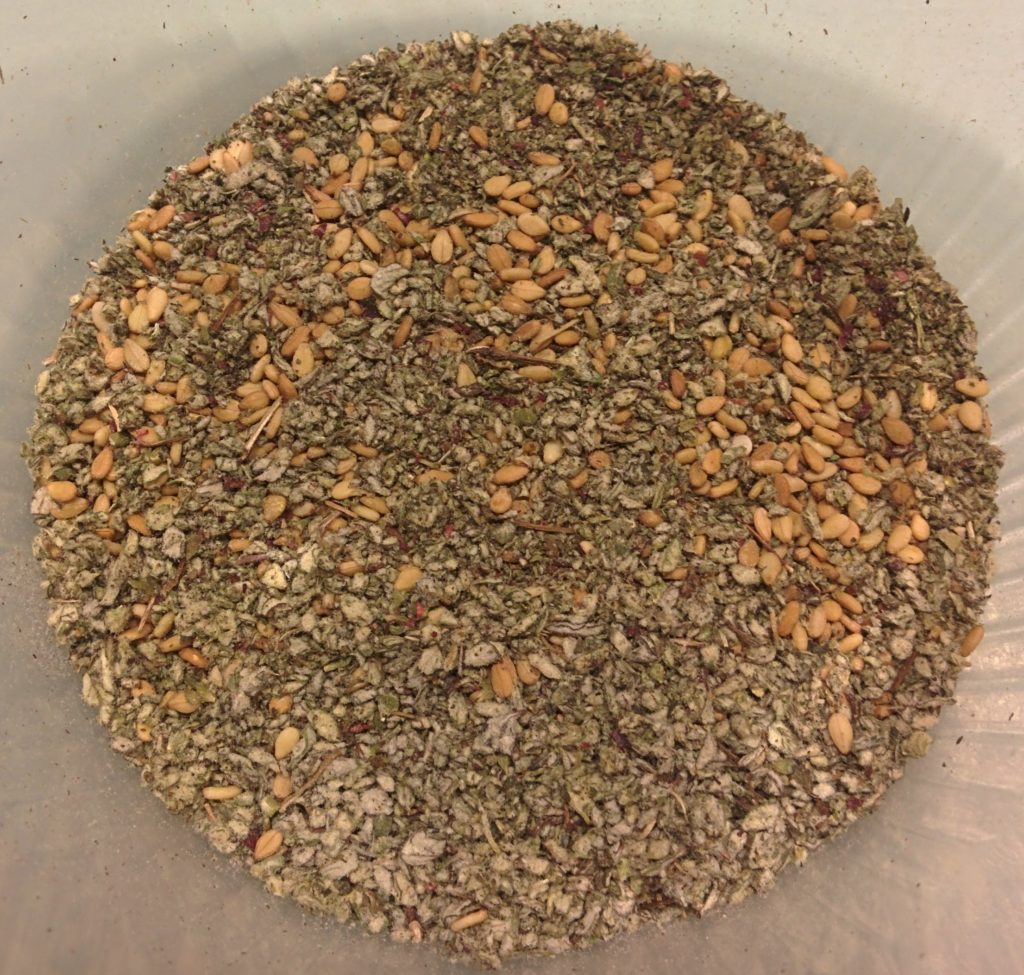 Green Jordanian za’atar which, according to what the author tells me, is the one to have, hence the title of this piece. It is indeed extraordinary and hard to find outside of Jordan apparently. -GG

In Palestine, I have bought za’atar in al-Nasrah (Nazareth), in al-Khalil and of course in Jerusalem. In their cookbook, Jerusalem, Ottolenghi and Tamimi write: “If there is one smell to match the emblematic image of the Old City of Jerusalem, one odor that encapsulates the soul of this ancient city nestling in the Judean Mountains, it is the smell of za’atar.”

Outside Palestine, one of the best places to buy these superior kinds of za’atar is Azhiman, in the Sweifieh section of Amman. The shop itself is worth a trip to Jordan. For me, a stop at Azhiman is an obligation, a ritual almost. I leave it to the last day of my stay, devote an entire afternoon to the pleasures it offers. Other similar stores have sprung up in Amman, now that the city has become a refuge for all those fleeing the wars in Iraq and Syria, as well as the Gulf state citizens seeking a stable place for their summer vacations. In fact, in the past ten years, Amman has become a culinary paradise, built out of the violence engulfing the entire region. 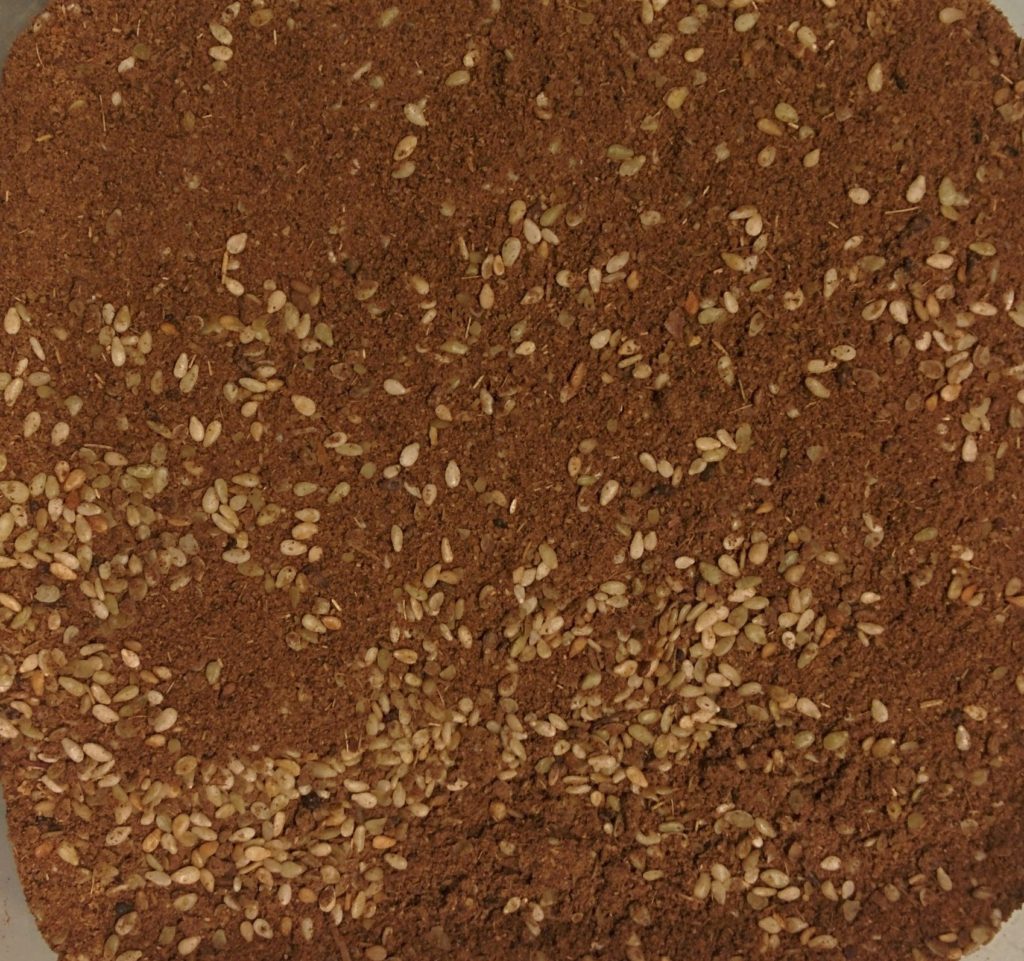 What is known as Aleppo blend za’atar, which leans a bit heavy on the sumac if you ask me. -GG

Azhiman is an older store that has moved with the times but kept its old charm and lack of pretentiousness. It caters to all classes of the population not just the foodies and the rich. At this compact, well-organized store, you will find half a dozen variations of za’atar—with and without salt, with and without sumac, with and without sesame seeds, and on and on. (The store has an equally varied, enticing selection of grains, spices, local soaps, chocolates, herb teas, and so on.)

That’s the za’atar that sits on my kitchen counter now, that beckons me in the morning and ends my day in the evening, that transports me to that grimy old kitchen of ours of decades past. My brother, eight years younger than I, would wait patiently for his sandwich. I would work fast, and before I was finished he would snatch his share. We would sit together at the dinner table, begin eating, our mouths circled by a shiny greenish film of oil and za’atar. 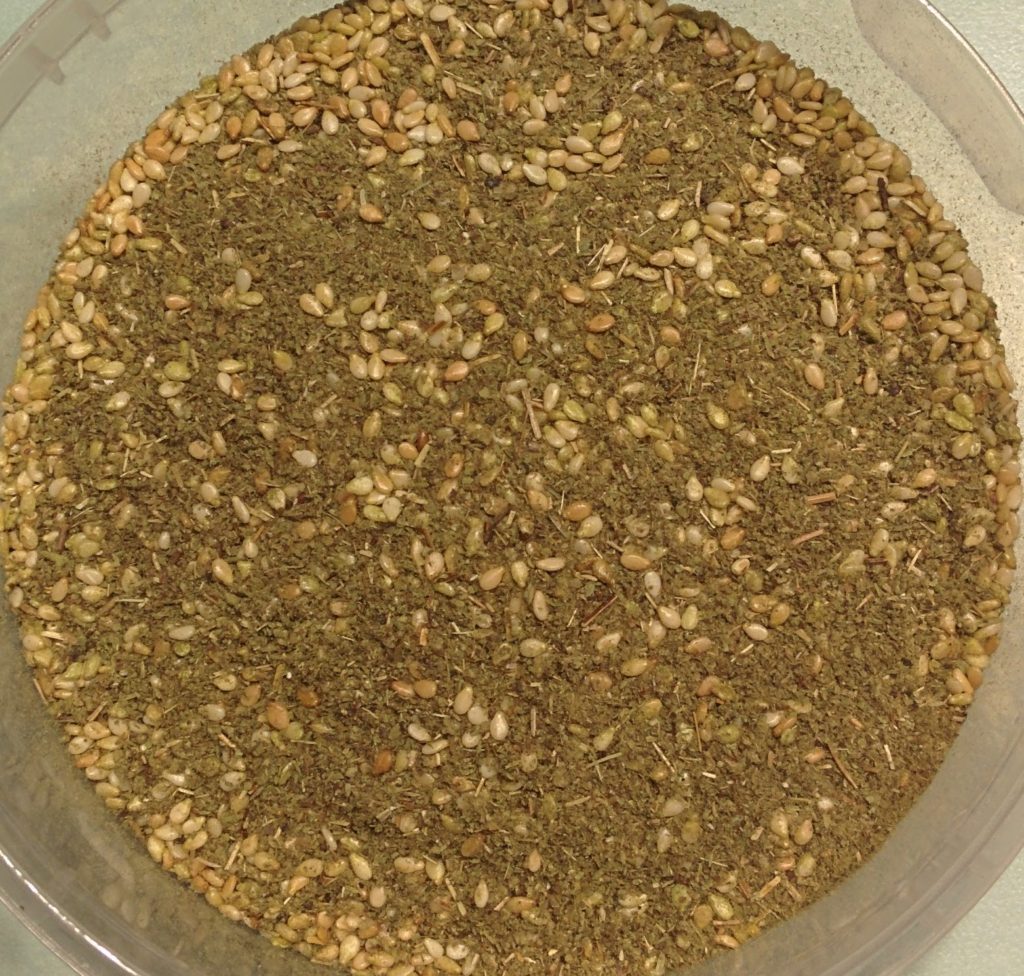 Lebanese blend za’atar, which was what I grew up with. One whiff of this stuff transports me to days when my mother would make fresh manaeesh, which made us drool in anticipation as we smelled it baking. -GG

Take a piece of flat Arabic bread, dip it in olive oil, then in the za’atar. That’s all. That’s the za’atar scene. The taste is other worldly—the aftertaste subtle and invigorating.   When the world weighs heavy like this, za’atar is a zap, a reminder that there is nothing more satisfying than the simplest, the most ancient of foods, nothing more wholesome than a piece of bread, olive oil, and this ancient herb. When the world is full of joy and possibility, za’atar’s ancient roots are calming, instructive, a reminder that the world may turn upside down in the blink of an eye but za’atar is eternal.