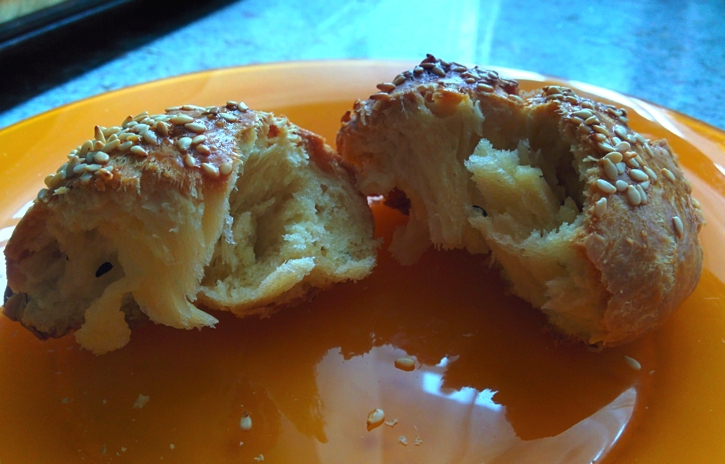 Growing up at the start of every spring I would look forward to savoring my grandmother’s choereg. She would prepare the faintly sweet, buttery rolls in huge batches and give us a dozen or so to take home. Usually my mother would slice each roll in half horizontally and toast it for a few minutes so that they would slightly caramelize, and then she would slather butter all over each half. I would take delight in watching the butter melt, slowly oozing into the pores of the roll. My grandmother taught me to eat choereg in the morning with briny feta cheese and Kalamata olives. Usually her homemade sujukh, the spicy beef sausage that she would let dry flat in cloth bags instead of intestines, would be served sliced in 1/8 inch thick slabs. My mother also learned how to bake choereg. But one year after our chocolate lab wolfed down the dough while our backs were turned she shied away from baking it in later years. The dog couldn’t digest all that yeasty buttery goodness and left little steaming rising packages for us all over the hallway. Needless to say it was gross, but  hilarious nevertheless.

Choereg is predominantly found in Western Armenian cuisine. I have never seen authentic choereg in Yerevan grocery stores, aside from a mushy impostor in a braided loaf available at one supermarket chain. You can find gata (nazouk), but that’s more of a flakey pastry than a bread roll. I never noticed choereg served in Istanbul cafés, either, not that I expected to, although boureg abound.

For easter I decided to take the plunge and make choereg for myself. It was high time I took a stab at it. I’m not much of a baker–dinner featuring plenty of roasted meat and assorted salads is more my thing. I’ve only baked chocolate chip cookies with huge success. Despite my choice Cuisinart non-stick cookware the brownies I once made from scratch came out horribly wrong, burned to a crisp on the edges and semi-raw in the middle. But this year I decided to be bold, thinking “screw it, worse comes to worse I toss the choereg and some poor scruffy stray dog nabs it from the trash bins.”

Some recipes are available online of course posted by Armenian culinary gurus and I do have an “Armenian-American” cookbook at home, but I was going to make choereg the only way possible–à la Clara, my grandmother. My mother sent me the recipe:

The first problem I noticed was the yeast cake. This recipe must have been jotted down 60 years ago when these things were all you could find on store shelves. Active yeast, which requires no water at all, is now commonly used for baking. An Internet search instantly revealed that 1 old-fashioned yeast cake (which I have never seen in my life) equals 2 1/4 teaspoons of active yeast. Luckily my grocery store had some in stock, made in Iran using Austrian technology, whatever the hell that means.

Her recipe doesn’t include mahleb–which is finely ground cherry pit–but I know she uses it. So I visited my Syrian-Armenian grocer in Yerevan’s GUM produce market, located a couple miles down the street. He advised that I use two teaspoons, which I did. Nigella seeds are optional–I tossed in two teaspoons, then regretted it thinking I used too much. But that amount was just fine, after all.

But in the confusion of the mixing process I didn’t know what to do with the warm water for the yeast cake I didn’t of course have, so I simply added it to the mixture. Seemed like the logical thing to do in the moment. That proved to be an unwise decision. The dough, or what was shaping out to be something resembling it anyway, turned into a batter. I kept stirring for 10 minutes anyway hoping it would magically solidify from the kinetic force generated. Then I started adding flour, a tablespoon at a time, mixing like crazy after each addition. 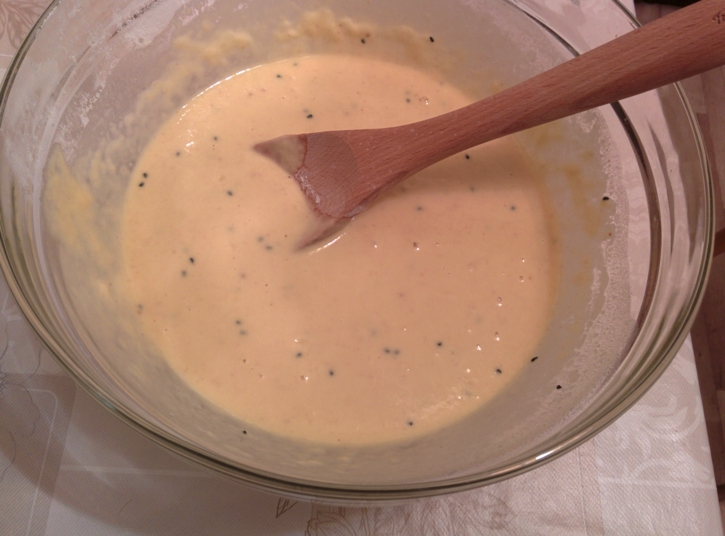 Eight tablespoons later I had a very sticky dough-like mass between my hands.  I was supposed to be kneading it on the table top but instead I ended up pulling and squeezing it in the air. It seemed more effective than just pounding away on the counter for minutes at a time. Needless to say I had no clue what I was doing or whether anything edible would pan out after baking. After the kneading session was over the dough went into a greased roasting pan, over which I placed two paper towel sheets and let it sit overnight. The plan was to bake the choereg early Saturday morning. It was already close to 2 am.

I am generally terrible with getting up in the mornings, and that Saturday was no exception. A minute after rising from bed I checked on the dough’s resurrection. It had doubled in size, which was what Clara expected of me. A strange hard crust developed, which dissolved after I mixed the dough a bit. Then it was time to make the familiar knot-like choereg shapes. I took egg-sized pieces of the dough as Clara described and rolled them out with the palms of my hands on my cutting mat. But the dough kept sticking to my fingers, and it would only stretch out thin in the middle of each rope-like mass but not at the ends, which remained rather thick. So I’d pick it up and try to tie it into a knot. I felt like I was playing Cat’s Cradle. Each roll looked fairly ugly and they actually varied in size. I was contemplating throwing the dough in a bread pan and wiping my hands clean of the stuff once and for all, but that would have been cheating. I was determined to replicate Clara’s choereg or else die trying (no, not really). The batch produced 11 choeregs. I think it should have amounted to 12 but as I said, I can’t roll that stuff out.

Then there’s the gas oven. I have an old Soviet monstrosity  here in my kitchen that the landlord refuses to replace. It doesn’t have an auto ignite switch–I have to manually light the pilots, that’s how old it is. Buying a new oven is problematic since the trend these days is to go electric, and there’s no electrical outlet in that corner of the kitchen. But I’ve found used, relatively recent European all-gas models on a local want ad site called List.am and I may finally replace it (unless a reader wants to buy one for the Garbanzo). Controlling the temperature on this thing is very problematic. Thanks to an oven thermometer I purchased (thank you, Marshalls) I can more or less gauge how hot the oven is likely to get depending on how far I turn the knob, since there are no temperature indicators to be found. The oven had to be preheated to 400 degrees F. The needle seemed to be on the 450 mark at baking time so I turned it down a bit and threw in the first batch after coating the buns with egg and sesame seeds and lined them up on parchment paper (a baker’s dear friend). Twenty minutes later the damn choereg was still raw–the temperature had fallen to 300 degrees. So I cranked the knob and got the oven nice and hot again. Ten minutes later they were out of the oven, all golden and puffy, and the next batch was in. 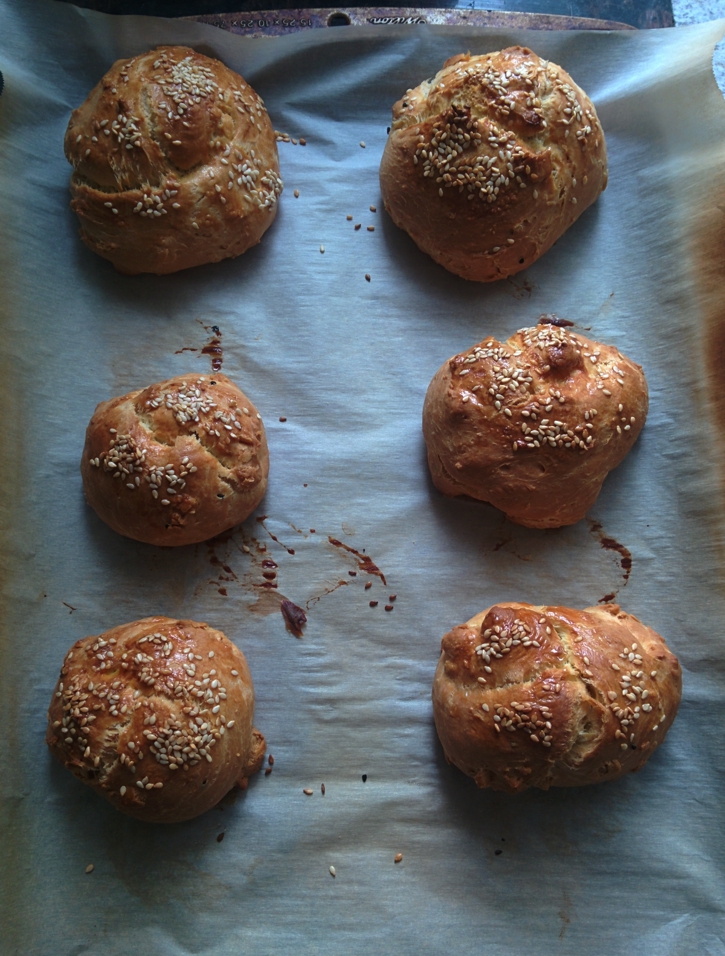 I was disappointed that the choereg didn’t have the sheen that Clara’s always seemed to have. But the flavor was indeed very similar. It certainly wasn’t sweet because I put practically no sugar in the mix–instead of a 1/3 of a cup I mistakingly used 1 teaspoon (no idea), but substituted the sugar with crystalized honey (which resembles a very light brown sugar). But it actually was faintly sweet due likely to all the French butter — I didn’t measure out an exact cup of course and I likely overdid it. But that’s the magic of baking, I suppose. You can only hope you’ll get something exactly as you intend it to come out. And yet, who really does?

NOTE (rev. 3/18): Clara’s original recipe calls for 5 cups of flour per batch, not 2 1/2 cups. Upon reflection I estimate that I used around 4 cups in the ordeal described above. I used around this same amount, probably closer to 5, in my near-catastrophic 2017 batch as well.